Oh boy, it’s been a while! About 6 months. Things have percolated a bit in my brain, but I have only just finally tried to get some of it out onto paper. I needed just few things as a basic structure to tangibly poke stuff around on a table. So these are really basic ideas, which will very much need tinkering and fine tuning, but so far I think it’s a reasonable start. Whether or not after the start it keeps going or gets scrapped, who knows! 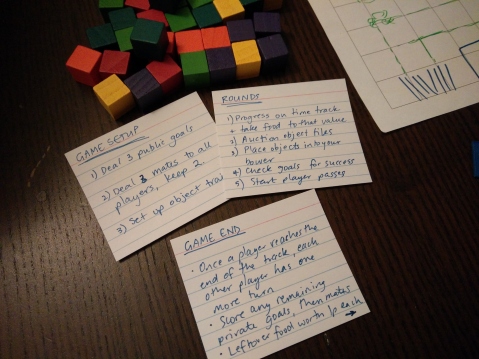 To start with, I have decided on some random public goals, as well as the “mate” cards which will be private – players will get 3 of those and choose two (scoring their choice at the end of the game, this is my attempt to offer a little flexibility). I have a Patchwork-esque time track right now, in which players will move to gain certain values of food (representing the bird’s time spent finding better food). Those food tokens will be used in an auction phase bidding on objects to place in your “bower”. 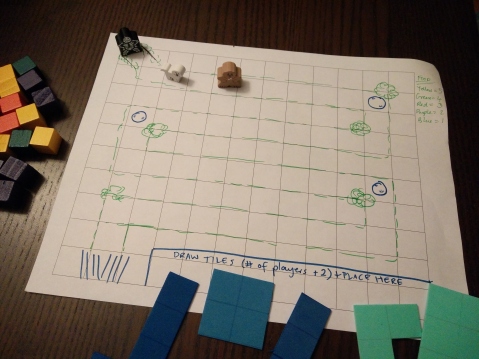 This is the “time track” – with the available objects for the auction round. I also have a few spots along the time track that are similar to the single tile patches in Patchwork – I think in this I’d like them to be bonuses for the last player to pass them over as a bit of a balance for not taking so many food tokens.

There’s my attempts at the public goals and mate cards. These are all really off the top of my head so they need a lot of work. But it’s just to get an idea of what I’d have players aiming for. A little set collection, a little puzzley stuff. 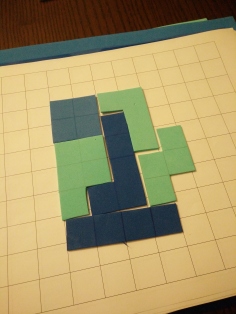 And here’s the “object” tiles! The idea is to have 3 types of objects which would be worth different values, but I haven’t exactly worked that into any of the cards yet (other than generically mentioning type). I’d like them to represent different things like, the garbagey blue things like plastic caps etc, and then the shinier nice things like glass etc. I know I had an idea earlier about birds being able to use one of their own feathers in their bower, but right now I’m not sure what function that could have. Still thinking!

I guess it’s time to show this to people? aaaahhhhhhh!

Categories (contains some but not all posts!)

Links to Board Game Stuff!